Data will reveal their lifestyles and migration paths.

A loggerhead, a hawksbill and a green sea turtle have been fitted with satellite tracking devices fixed to their shells, allowing the Environment Agency – Abu Dhabi (EAD) to monitor their progress and collect data about their lifestyles and migration paths.

The three turtles are part of a large and diverse group of previously rescued turtles that were released by EAD back into Abu Dhabi’s waters via the beach at Saadiyat Rotana Resort & Villas in celebration World Sea Turtle Day that falls on 16 June each year.

The released group came from a batch of 150 turtles that the EAD is currently rehabilitating at the National Aquarium.

The EAD will now be Agency to monitor the progress of the three turtles and collect data on their lifestyles and migration paths. 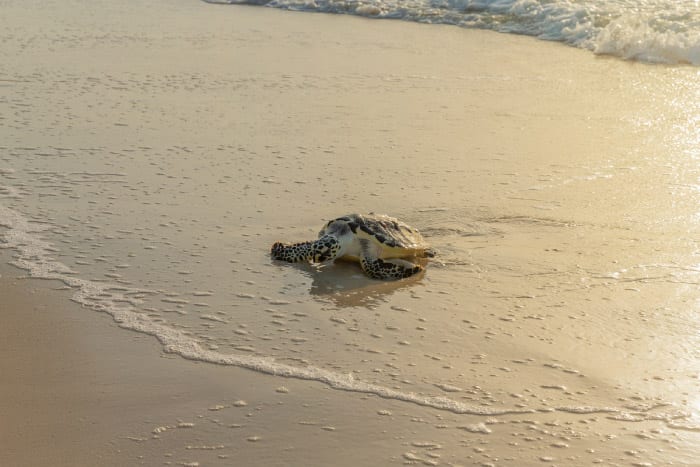 H.E. Major General Staff Pilot Faris Khalaf Al Mazrouei, Commander-in-Chief of the Abu Dhabi Police and member of the Agency’s Board of Directors, and Her Excellency Dr. Sheikha Salem Al Dhaheri, Secretary General of EAD attended and participated in the launch event.

The turtles’ release is the final step in their rescue and rehabilitation process, significantly increasing their chances of survival.

The remaining turtles are currently being rehabilitated by the National Aquarium (TNA), following the signing of a Memorandum of Understanding (MoU) between the EAD and TNA in 2020.

Since then, the collaboration has resulted in the successful rescue and release of over 250 turtles, with the remaining turtles being cared for by the National Aquarium for future release.

The turtles were initially discovered and rescued from the UAE’s shores by the Wildlife Rescue Team, a rescue and rehabilitation programme developed by both parties, dedicated to preserving the health and welfare of the region’s wildlife.

The team supervised the monitoring and rescue of these turtles from the coasts of the Emirate. Once fully recovered, the sea turtles were transferred to the beach at Saadiyat Rotana Resort & Villas in preparation for their return to the wild.

On this occasion, Her Excellency Dr. Sheikha Salem Al Dhaheri, Secretary General of EAD said: “We in the Emirate of Abu Dhabi are proud of the efforts made to protect sea turtles and the continuation of the rescue and rehabilitation programs since 2005.

“I am pleased to witness the success of this year’s programme, which was a collaboration with our strategic partners – the National Aquarium, where we launched the largest rehabilitation center for wildlife and marine life in the region.

“Since 2015, our tireless efforts with partners and the public, have helped us rescue, rehabilitate and successfully release hundreds of turtles, and we are excited to now track their release back into their natural marine environment.

“We named one of the turtles that we are currently tracking “Amal” (Hope); it is a green turtle that lost one of its front fins after becoming entangled in an abandoned fishing net. It was called Amal because of the meaning of the name, which means optimism and an aspiration to live despite harsh circumstances.”

The EAD has been researching, monitoring and protecting marine turtles in Abu Dhabi since 1999 and has succeeded in maintaining a stable population in our territorial waters across the emirate.

Abu Dhabi waters are home to more than 5,000 sea turtles, both green and hawksbill turtles. The main threats faced by turtles are net entanglement and boat collisions. EAD has been rescuing and rehabilitating turtles since 2005 and has rescued more than 700 since during this time.