An army of women are hard at work behind the doors of the EAD. Team Yalla chats to just one of them.

Anybody who follows the Environment Agency Abu Dhabi’s (EAD) great work on its social media platforms will see how active the it is across the Emirate of Abu Dhabi.

Early this year, the agency produced and released an eduDoc Wild Abu Dhabi: The Turtles of Al Dhafra, at VOX Cinemas at Yas Mall. And Team Yalla was there, along with the wonderful team of EAD.

Behind the doors of EAD is an army of women working together hand-in-hand for a better environment, a more sustainable Abu Dhabi.

It is immense and many of the women, and men, who carry out this much needed work view it as a calling.

One such woman is Hind Al Ameri, Assistant Scientist – Marine Species, Terrestrial & Marine Biodiversity at EAD. Affectionately known as The Turtle and while apt, the origins of the nickname surprisingly has no connection to the great work that she, along with the EAD team, does to protect turtles in a fight for survival.

“It all started in high school. It’s not like I was a fan of turtles back then.”

“It was just a nickname I was given because I was very calm. I was patient in that I took my time to do things and one of my friends just came up with that and it stuck, so everyone calls me that.”

Hind recalls how during her primary school days and on family trips she was made aware of the environment.

She shares how she would go on fieldtrips to the desert and visit the Falcon Hospital. It was during such trips that Hind’s parents were conscious of sharing their knowledge of the environment “I think this is the basis of how and where I am today.”

Hind went on to study Environmental Science at university and close to graduating, she was “one of the lucky ones” who interned at EAD for six weeks, working in different sections, not only in biodiversity, but also areas connected to air quality. 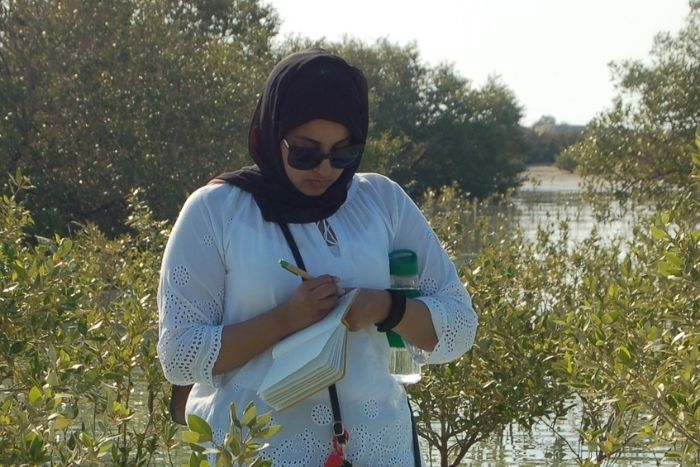 “I would go out with the team that would visit factories to make sure that health and safety rules were being followed.”

Hind’s hard work paid off and after graduating she started working for the agency within the biodiversity section, or specifically Marine biodiversity.

“Because I was more interested in research, I ended up in the Marine Assessment and Conservation Section,” hind reveals.

“During my intern period, I also noticed it was a fun group; they would be looking out for new research to publish work; you weren’t stuck in the office all day.”

Hind describes how the section consisted of just “three to four women”, including HE Dr. Shaikha Salem Al Dhaheri, the Secretary General of the Environment Agency – Abu Dhabi. For me, it was her encouragement that pushed us to do more and more.”

After studying her Masters in Bio Diversity and Conservation at Leeds University, UK, Hind returned to Abu Dhabi to lead the Marine Turtle Conservation Programme, which she is at pains to point out that it is not a “one-person team; everyone is involved”.

Hind is now completing a PhD programme in Biological Sciences at Exeter University, in the UK.

“I’m in my final data collection year of the four-year programme and then I have another year for write-up. So about a year and a bit left.” 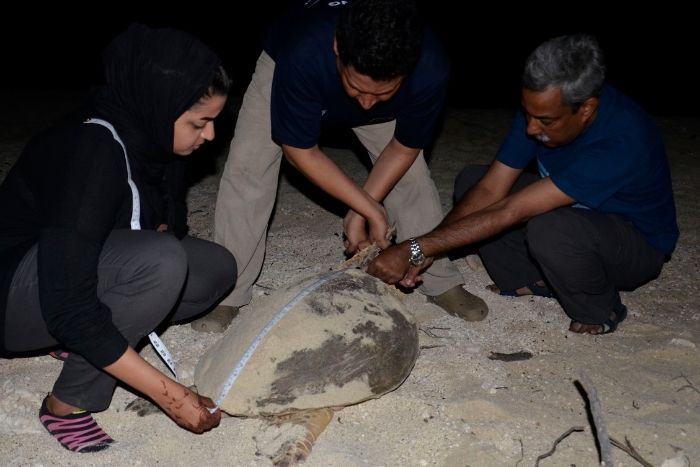 Despite such changes in temperature, Hind believes that since turtles have inhabited Earth for thousands of years they will be okay.

Hind recounts the work that she and the EAD have done in protecting turtles and, hopefully, helping them to survive for thousands of more years.

Juggling the hard work that she undertakes with her studies is nothing less than arduous, if rewarding. Hind says that this is something that all women could do, but only if they truly wanted to.

“I think it’s always us who put limits on ourselves. Like if I say ‘I can’t do something’, it’s not because I can’t really do it; it’s just me trying to avoid doing it or trying to find an easy way out. It’s not easy to balance work and studies, but it’s good if you are following your passion… then you wouldn’t mind if you were to stay up late one or two nights just to finish something, to get it done.

“You are climbing a career ladder to your ultimate goals. However, it is passion that is always the key, regardless of the university major you aim to achieve, or whatever the goal may be. It’s simply passion that will see you through.”

To find out how to get involved with the Environment Agency – Abu Dhabi, visit ead.gov.ae