Guests can access the park and other Yas Island attractions for every night stay.

This is so exciting!

All your favourite Warner. Bros characters and shows under one roof and now you get to stay with them too!

Yes, that’s right folks, The WB™ Abu Dhabi, located on Abu Dhabi’s Yas Island, the first ever Warner Bros. themed hotel, part of Curio Collection by Hilton, has officially opened its doors to guests and Bugs Bunny and Daffy Duck were in situ welcoming attendees to this spectacular occasion.

Miral, Abu Dhabi’s leading curator of magnetic experiences in collaboration with Warner Bros., home to one of the most well-known and successful collections of brands and characters in the world, declared to guests yesterday evening (12 November) that The WB™ Abu Dhabi, located on Abu Dhabi’s Yas Island, now open!

Each registered room guest will have access to the park as well as other Yas Island attractions for every night stay.

Visit the hotel and get to see first-hand  your favourite stories and characters brought to life through unique hospitality experiences that only the rich history and storied legacy of Warner Bros. could offer.

“This is yet another great moment for us, with The WB™ Abu Dhabi hotel opening on Yas Island, further positioning it as a top global destination for leisure, entertainment and business, said HE Mohamed Khalifa Al Mubarak, Chairman of Miral, speaking to the press and guests at the opening.

“We are very proud of our long-standing partnership with both Warner Bros. Themed Entertainment and Hilton, bringing world firsts and global hospitality offerings and experiences to Abu Dhabi.”

Featuring over 400 curated images and film and TV props, guests at the world’s first Warner Bros. hotel will be treated to a journey of discovery through film and television, enjoying Warner Bros.’ rich history and library of timeless productions at every touchpoint from arrival to check-out.

While dining in one of five restaurants on the property, you can listen as the piano from “Westworld,” the hit HBO science fiction TV show, plays a familiar tune.

Visitors can stroll through the lobby or admire 360-degree city and sea views alongside their favorite props and costumes from Warner Bros. films and TV shows.

Kids and families can ring up one of their favourite Looney Tunes characters for a room service treat brought to them by the Wascally Wabbit, Bugs Bunny himself. 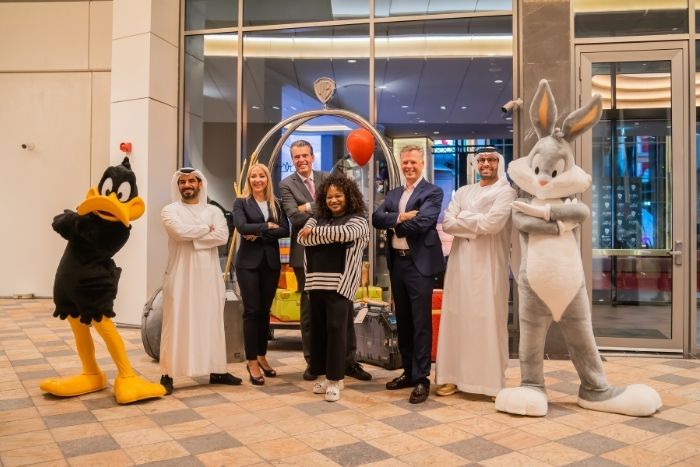 “Our dream has come true with the grand opening to the first ever Warner Bros. branded hotel,” said Pam Lifford, President of Warner Media Global Brands and Experiences.

“Our incredible partners at Miral and Hilton, have helped us make this vision a reality for our fans around the world.”

“Guests visiting Warner Bros. World right next door will have the ultimate encore to their park experience by relaxing and treating themselves to a stay at The WB Abu Dhabi.”

Begin your story at The WB Abu Dhabi hotel as soon as you pull up to the hotel and are greeted by digital screens that span the height of the building, playing over 35 different pieces of original content created for the hotel.

Before entering the hotel, you won’t want to miss the iconic Friends fountain, or snapping a pic with the all-new Batmobile from the upcoming highly anticipated film, Then enter the lobby and be drawn to the hotel’s uniquely designed lobby columns. A spectacular Living Archive (spiral staircase) also resides in the lobby and will house an evolving collection of items dedicated to the vast depth and history of WB’s role in entertainment.

It will showcase original films and a number of Warner Bros. props such as Cowboy boots from the 1956 film Giant, worn by James Dean, Michael Keaton’s cowl from 1989 film, Batman, original drawing from The Great Gatsby and so much more.

As you continue their journey, the storytelling experience is further enriched with guest room corridors displaying a curated gallery of artwork.

Furnishing with nods to Warner Bros. legacy of rich story telling make up each of the hotel’s 257 rooms.

Three themes have inspired the guestroom artwork. The first theme, “From Script to Screen,” highlights standout moments from Warner Bros.’ movies and shows and documents the journey from the written page to the final shot.

The second theme, “Artist Confidential,” celebrates a variety of talent in front of and behind the camera in some of Warner Bros.’ favorite productions.

There are also five dining options catering to both adults and children.

Craft Services, located in the lobby lounge, offers a relaxing coffee break after a busy day, while Sidekicks is the perfect family friendly place for socialising and interacting while enjoying a flavourful international menu.

For those lounging by the pool, The Matinee provides a casual dining option for guest of all ages, complete with a dive-in pool theatre and Mediterranean menu.

Additionally, guests looking to indulge in an elegant dining experience, can visit The Director’s Club offering a sophisticated meatery where charcoal ovens, perfectly aged cuts, and a menu selection of dishes inspired to reflect the movie scene setting and supporting the whole cast, serve the mature palate.

Or enjoy an experience at The Overlook, a fabulous lounge with a relaxing infinity pool and beautiful 360-degree city, theme park and sea views.

The hotel is home to a host of leisure amenities for guests to enjoy, whether that’s lounging by the family pool area, working out in the fitness center, relaxing in the spa, exploring the artwork and props or shopping in the Warner Bros. store, the Prop Shop. For younger guests, the Kid’s Club will offer a vibrant and playful space designed to bring Warner Bros.’ characters to life.

Throughout your stay, some of WB’s world-renowned characters such as Bugs Bunny, Daffy Duck and others will participate in entertaining activities throughout the hotel providing lifelong memories.

To book your place, visit The WB™ Abu Dhabi

ALADDIN! auditions: Seize your chance to light up the stage